CAIR Calls on U.S. House Committees to Probe the Purchase of Personal Data from Muslim Prayer, Quran and Marriage Apps 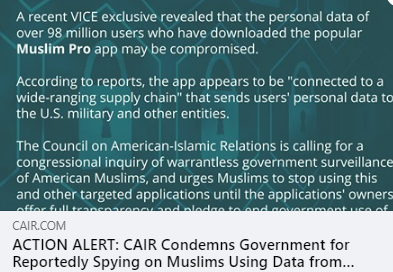 In a letter to U.S. House Committee on the Judiciary Chair Jerry Nadler (D-NY), U.S. Committee on Armed Services Chair Adam Smith (D-WA), and Permanent Select Committee on Intelligence Chair Adam Schiff (D-CA), CAIR requested the committees to determine whether the use of the data contributed to any civilian casualties in foreign military operations. Further, CAIR encouraged Congress to consider drafting legislation that would prohibit federal law enforcement, intelligence agencies and the military from purchasing data about American citizens that would otherwise require a warrant to obtain.

An estimated 98 million people use “Muslim Pro” around the world, many of whom are Americans. An additional 100,000 have downloaded “Muslim Mingle.”

In his letter to Congress, CAIR Director of Government Affairs Department Robert McCaw wrote in part:

“According to the November 16th article published by Vice titled ‘How the U.S. Military Buys Location Data from Ordinary Apps,’ U.S. Special Operations Command (USSOCOM), the branch of the military, responsible for counterterrorism, counterinsurgency, and special reconnaissance purchased through military contractors third-party access, via the company X-Mode, to the movement data of Muslims who use the popular apps Muslim Pro and Muslim Mingle.”

“In other words, the U.S. military admits using personal data from Muslim religious ‘apps’ to conduct special forces operations, which could include lethal attacks. The commander’s statement also indicates that the military may possess the data of American Muslims.”

“For years, far too many Muslim Americans have experienced spying, profiling, and other forms of government discrimination here at home, while far too many Muslim civilians overseas have been killed in drone strikes and other disastrous military operations. The notion that our government might be using popular religious applications to engage in such conduct simply adds insult to injury.

“As you know, the government would need a warrant to secure personal movement data from the cell phones of American citizens if it was not available for purchase. We question the legality of the U.S. government’s purchase of private data on the movements of these apps’ users, which include Americans. We are also deeply concerned about the likelihood that the military has used the data to launch deadly attacks on Muslim civilians overseas.

“We also strongly encourage Congress to consider drafting legislation that would prohibit federal law enforcement, intelligence agencies, and the military from purchasing data about American citizens that would otherwise require a warrant to obtain.”