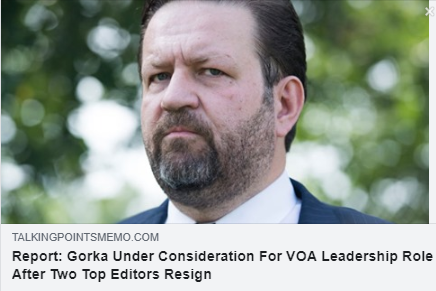 USAGM is an independent agency funded by the federal government that promotes a U.S. prospective in news media markets across the world in support of freedom and democracy. Voice of America is part of USAGM.

[NOTE: In 2007, now USAGM head Michael Pack collaborated with white supremacist and former Trump Administration advisor Stephen Bannon in co-founding the racist and anti-immigrant website Breitbart News. Because of Pack’s relationship with Bannon and Breitbart, Senate Democrats held up his nomination over fears that he would politicize USAGM.]

“Sebastian Gorka’s extremist and Islamophobic views, and his reported past and current associations with racist and anti-Semitic groups, should disqualify him from having any role in leading such an independent and renowned American news and media institution like Voice of America,” said CAIR Director of Government Affairs Robert S. McCaw. “An actual fascist like Gorka has nothing positive to contribute to VOA’s mission of supporting the spread of freedom and democracy around the world.”

According to a CNN article, “A well-placed VOA employee said there are internal discussions about a sizable shakeup coming to the agency that may include former White House official and conservative radio host Sebastian Gorka taking on a leadership position. Given Gorka’s partisan background, such an appointment would send a major message about VOA shifting to become a mouthpiece for the administration.”

https://www.cnn.com/2020/06/15/media/voice-of-america-top-officials-resign/index.html
Is Trump putting fascists in charge of the Voice of America?

In August 2017, CAIR welcomed the resignation of Gorka as a White House adviser.

CAIR previously called for Gorka’s dismissal from the Trump Administration following revelations that he “publicly supported a violent racist and anti-Semitic paramilitary militia” in Hungary and that he is a formal member of a Hungarian group listed by the U.S. State Department as having been “under the direction of the Nazi Government of Germany” during World War II.

Gorka has been criticized for his Islamophobic views, including once calling religious profiling of Muslims “common sense” and declining on several occasions to say whether President Trump believes Islam is a real religion.

SEE: How Did Sebastian Gorka Go From the Anti-Muslim Fringe to White House Aide?

SEE: Gorka Declines to Say if Trump Believes Islam is a Religion

CAIR also decried Katharine Gorka, Sebastian Gorka’s wife, a notorious Islamophobe in her own right, to be the new press secretary at Customs and Border Protection (CBP).

Katharine Gorka has claimed that DHS trains its agents “falsely, according to [her]” that Islam is a “religion of peace.”

In 2014, Katherine Gorka wrote that when “Presidents Bush and Obama both publicly declared Islam to be a religion of peace,” it “struck a sour chord for many,” and that “American and Western leaders have preemptively shut down any debate within Islam by declaring that Islam is the religion of peace.”