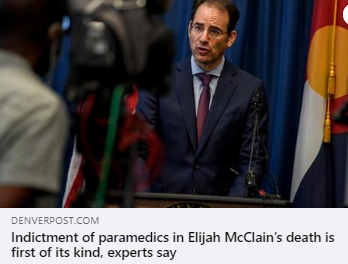 (DENVER, CO, 9/3/2021) – The Colorado chapter of the Council on American-Islamic Relations (CAIR-Colorado) today welcomed charges of manslaughter and reckless homicide for two paramedics who caused the death of Elijah McClain in Aurora, Colo.

On Aug. 30, 2019, Elijah McClain, a 23-year-old Black man from Aurora, Colo., died after he was violently arrested by Aurora police the previous week. After he was handcuffed, paramedics administered a dose of ketamine to McClain in an attempt to sedate him. McClain went into cardiac arrest while being taken by ambulance to a hospital, where he was taken off life support.

On Wednesday, the two paramedics who administered the ketamine to McClain were indicted with charges of manslaughter and reckless homicide, as well as three counts of assault and six sentence-enhancing charges. The three officers who detained McClain are also facing felony charges for their role in the man’s death.

According to the indictment, the paramedics failed to physically check McClain and incorrectly diagnosed him with excited delirium. They administered a dose of ketamine too big for his size and failed to monitor him after the injection. If the paramedics and officers are found guilty, they could face years in prison.

In a statement, CAIR-Colorado Acting Board Chair Krista Cole said:

“The actions of the paramedics and police officers were unacceptable and demonstrate a total disregard for life. We welcome the charges and urge the state to uphold justice for all Americans.”

Cole said the American Muslim community and CAIR stand in solidarity with all those challenging anti-Black racism, xenophobia, Islamophobia, anti-Semitism, white supremacy, and all other forms of bigotry.