CAIR Concerned by Removal of Anti-Racist Sign from Wisconsin Library 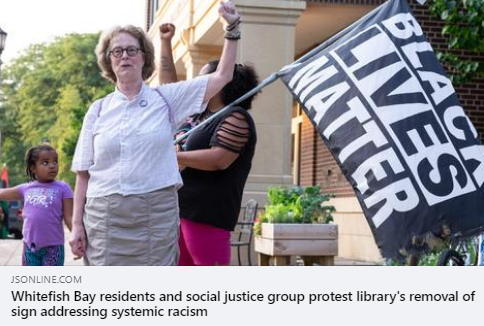 (WASHINGTON, D.C., 7/28/2021) – The Council on American-Islamic Relations (CAIR), the nation’s largest Muslim civil rights and advocacy organization, today expressed concern about the removal of an anti-racist sign from in front of a public library in Whitefish Bay, Wisc.

The sign, which read “Whitefish Bay will be a welcoming community that recognizes systemic racism, and actively works to address and dismantle it” was originally placed outside the library by Bay Bridge Wisconsin, a group that works to raise awareness of racial and cultural bias.

It was removed after backlash from some in the community, which the library director said interfered with the library’s operation. On Tuesday evening, residents gathered in front of the library to protest the sign’s removal.

“Systemic anti-Black racism and white supremacy are ongoing issues that must be addressed by all public institutions,” said CAIR National Communications Director Ibrahim Hooper. “We are concerned by the apparent capitulation to those who seek to obscure the reality of systemic racism and its impact on minority communities.”