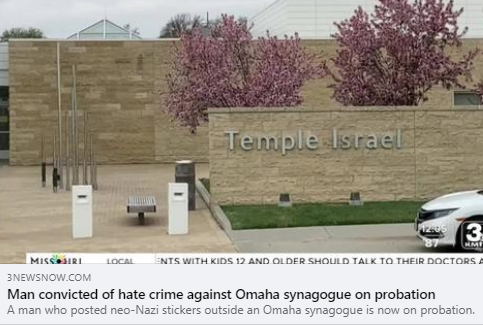 (WASHINGTON D.C., 7/27/2021) – The Council on American-Islamic Relations (CAIR), the nation’s largest Muslim civil rights and advocacy organization, today welcomed the conviction of a man who posted neo-Nazi stickers outside an Omaha synagogue.

Jonathan Ziegler was found guilty of a hate crime and damaging property for the April vandalism at Temple Israel.

“We welcome this conviction and hope it sends the message to all those who contemplate targeting minority communities that bias-motivated acts will have legal consequences.”

He noted that earlier today, CAIR supported the removal of a Confederate monument in Collierville, Tenn., welcomed the decision of a Delaware House member not to seek reelection after using an anti-Asian racial slur and condemned a North Carolina car dealership after a racist Facebook post by the company targeting a Black customer.

SEE: CAIR-NY Condemns 3rd in Series of Anti-Muslim Hate Crimes in Queens, Urges Anyone with Info to Call Police