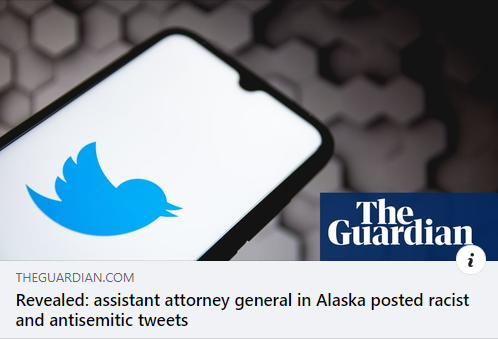 (WASHINGTON D.C., 7/22/2021) – The Council on American-Islamic Relations (CAIR), the nation’s largest Muslim civil rights and advocacy organization, today called for the removal of an Alaska assistant attorney general who reportedly posted a series of racist and anti-Semitic messages on Twitter.

Investigations by anti-fascist researchers and The Guardian reportedly revealed that the assistant attorney general, who acted for the department of law in several civil rights cases, used the Twitter handle JReubenClark to post racist and anti-Semitic messages on Twitter. The tweets included claims that Jews are involved in a conspiracy against white people and attacks on the Black Lives Matter movement and Black public figures. The account also promoted pseudo-scientific theories about racial differences in IQ. In one tweet, JReubenClark said the “Civil Rights Act of 1964 and its consequences have been a disaster for the human race,” paraphrasing a statement by so-called Unabomber, Ted Kaczynski. The account also regularly featured racist comments about Latinos and Native Americans.

Many tweets called for violence against political opponents. The account was one of the first to promote Deseret Nationalism, an extremist pseudo-religious ideology many followers of whom express racist and neo-Nazi ideas. After information about the assistant attorney general was shared with the Alaska Department of Law, Alaska’s deputy attorney general Cori Mills said the department is “gathering information and conducting a review.” Mills said that since the investigation involves personnel issues, “we are very limited in our ability to comment further.”

“If this official did indeed make these racist, bigoted and violent statements, the State of Alaska should immediately terminate him,” said CAIR Government Affairs Director Robert McCaw. “Justice is threatened by the presence of such appalling racism and bigotry anywhere near the judiciary system.”

CAIR Urges Firing of Tennessee Police Officer Who Made Racist Remarks, Calls for Independent Probe of Racism in Department