CAIR Urges Firing of Tennessee Police Officer Who Made Racist Remarks, Calls for Independent Probe of Racism in Department 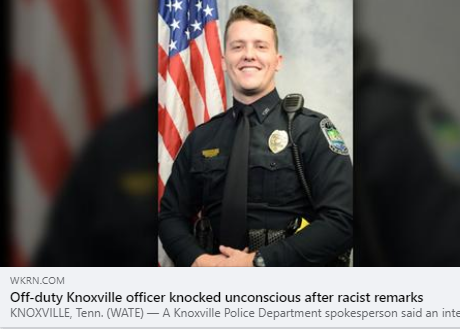 (WASHINGTON D.C., 7/8/2021) – The Council on American-Islamic Relations (CAIR), the nation’s largest Muslim civil rights and advocacy organization, today called on Tennessee’s Knoxville Police Department (KPD) to fire an officer who reportedly made racist remarks and to allow for an independent investigation into alleged racism in the Department, after an officer filed a complaint saying commanders lied about the way they handled racist harassment.

At a wedding last month, a KPD officer allegedly told a Black attendee he “didn’t know they let Black people in the reception hall.” He continued making racist remarks despite the man telling him several times to stop, after which he was knocked unconscious.

The Knoxville Police Department said the officer has not returned to patrol since the incident, and it is unclear when he will be cleared to do so. A police department spokesman said an investigation into the incident is underway.

A Black KPD officer filed a complaint last month saying that several commanders misled internal investigators looking into his complaints against another officer who told him “he should know about being on a slave ship” in 2019.

Despite multiple officers reporting the incident, it was ignored and covered up by KPD commanders. The officer who made the comment resigned after another officer complained about his behavior during an exit interview. Six current and former officers have told the media that the KPD is permissive of racism.

“The behavior of the officer who allegedly made racist remarks at a wedding is unacceptable, and he should be removed from the force. The KPD has demonstrated an apparent unwillingness to fight racism in its ranks and therefore cannot be trusted to conduct a thorough investigation. A third-party independent investigation into the department’s handling of racist harassment is necessary.”

Hooper noted that CAIR has repeatedly spoken out against bigotry and racism in law enforcement.

Hooper said that the American Muslim community and CAIR stand in solidarity with all those challenging anti-Black racism, xenophobia, Islamophobia, anti-Semitism, white supremacy, and all other forms of bigotry.