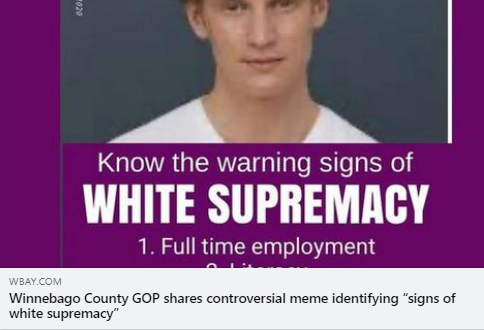 The Wisconsin GOP Facebook post listed attributes such as having car insurance, a full-time job, no criminal record, and a good credit score as “signs of white supremacy.” Some who commented on the post called it “disgusting” and “inappropriate.”

In Massachusetts, two Latino candidates found racist messages on the back of their campaign signs at a busy intersection.

“All those involved in our nation’s political process must stand firmly against racism, white supremacy, xenophobia, and all other forms of bigotry,” said CAIR Government Affairs Department Director Robert McCaw.

McCaw noted that CAIR today called on Tennessee’s Knoxville Police Department (KPD) to fire an officer who reportedly made racist remarks and to allow for an independent investigation into alleged racism in the Department, after an officer filed a complaint saying commanders lied about the way they handled racist harassment.

SEE: CAIR Urges Firing of Tennessee Police Officer Who Made Racist Remarks, Calls for Independent Probe of Racism in Department