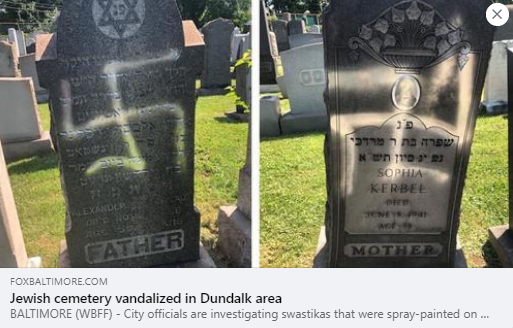 (BALTIMORE, MD, 7/8/2021) — The Maryland office of the Council on American-Islamic Relations (CAIR) today condemned vandalism at German Hill Road Jewish Cemetery in Baltimore City over the weekend in which a dozen headstones were defaced with anti-Semitic graffiti, including Nazi swastikas.

The graffiti has been removed since the incident was reported, and the cemetery gates have been locked to prevent a repeat incident. Anyone with information about the perpetrators of this crime is urged to notify the Baltimore City Police Department at 410-396-2411.

“Maryland Muslims stand in strong solidarity with the Jewish community against this cowardly, despicable act of hate,” said CAIR’s Maryland Director Zainab Chaudry. “We extend our condolences to the families whose loved ones’ graves were targeted in the hate crime, and to the Jewish community at large. It is imperative that we unite against all forms of hate in our state.”

Last month, CAIR condemned neo-Nazi hate symbols discovered in a Baltimore City neighborhood and praised the quick response of local residents who painted over it.