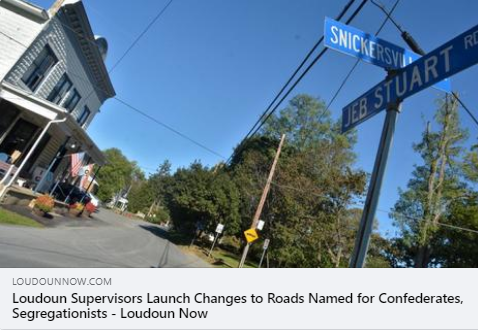 (WASHINGTON D.C., 7/7/2021) – The Council on American-Islamic Relations, the nation’s largest Muslim civil rights and advocacy group, today welcomed a decision by the Board of Supervisors of Virginia’s Loudoun County to begin the process to rename roads named for Confederate and segregationist figures.

A county review of public facilities identified 16 public roads named for Confederate and segregationist figures, including Confederate generals Robert E. Lee, Thomas ‘Stonewall’ Jackson, and J.E.B Stuart. The Board of Supervisors voted 8-0-1 to develop a work plan and public process for renaming the roads, and 7-1-1 to come up with cost estimates for hiring consultants to determine the origins of road names that were unclear.

“We applaud the decision by Loudoun County officials to remove the names of traitors and white supremacists from public roads,” said CAIR National Communications Director Ibrahim Hooper. “Ending the practice of honoring of those who fought to uphold slavery and systemic anti-Black racism is crucial to removing the destructive legacy of the Confederacy.”

He noted that yesterday, CAIR called on the Loudoun County Board of Supervisors to remove the names of Confederate and segregationist figures from public roads.

Hooper added that CAIR has repeatedly urged and supported the removal of Confederate symbols nationwide.