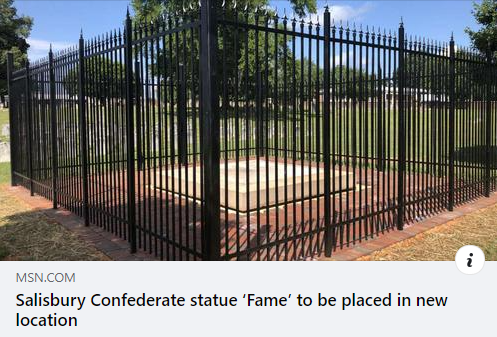 (WASHINGTON D.C., 7/23/2021) – The Council on American-Islamic Relations (CAIR), the nation’s largest Muslim civil rights and advocacy organization, today welcomed the removal of a Confederate monument from display on a public intersection in Salisbury, North Carolina.

The City of Salisbury announced Friday morning that the monument known as ‘Fame,’ which depicts a Confederate soldier, would be moved from its location at a public intersection to a cemetery, where it will be surrounded by a fence and monitored by security cameras. The United Daughters of the Confederacy signed an agreement to relocate the statue, which was declared a public safety risk by police following protests opposing its presence on the street. The city council adopted two resolutions to move the statue on Jun. 16 2020. A nearly identical twin statue was removed from public display in Baltimore in 2017 following a violent white nationalist rally.

“Monuments to racist traitors do not belong on public property,” CAIR National Communications Director Ibrahim Hooper said. “We welcome the removal of the statue, and urge cities nationwide to remove from their streets all symbols of hate and bigotry.”

Hooper noted that CAIR has repeatedly urged and supported the removal of Confederate symbols nationwide.