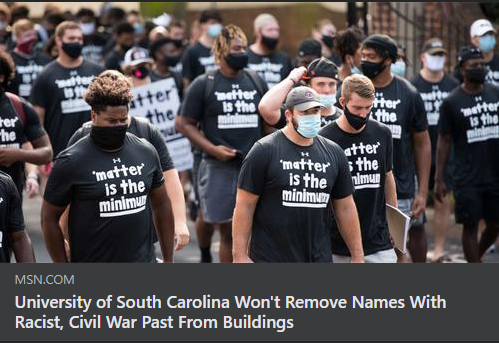 On Wednesday, USC Interim President Dr. Harris Pastides issued a letter to campus saying that state law prevents the university administration from changing the names, but that university officials “have a duty to tell a more complete history of these individuals and their acts in the context of our shared community values.” The letter suggested naming new buildings after Black leaders and historical figures, but seemed to indicate that the university would not request lawmakers to change any building names.

The Heritage Act, passed in South Carolina in 2000, requires a two-thirds vote from the General Assembly to change the name of any building named for a historical figure.

West Virginia’s Capitol Building Commission met Wednesday but did not discuss removing a bust of Confederate general Thomas “Stonewall” Jackson from the Capitol rotunda, or a statue of Jackson from the southeast corner of the Capitol complex. Calls for the removal of the bust and statue date back a decade, and were intensified during the Summer 2020 protests following the killing of George Floyd. In December, the Capitol Building Commission held a public hearing at which 7 out of the 8 speakers called for the statue and bust to be removed from Capitol grounds.

“Memorials celebrating the racists who defended slavery and segregation do not belong on public property,” said CAIR Deputy Director Edward Ahmed Mitchell. “We urge public institutions to remove relics of hatred and bigotry from their institutions so that all feel welcome and so that our nation can finally stop celebrating one of its darkest chapters.”

He noted that CAIR has supported the removal of Confederate statues and symbols across the country.