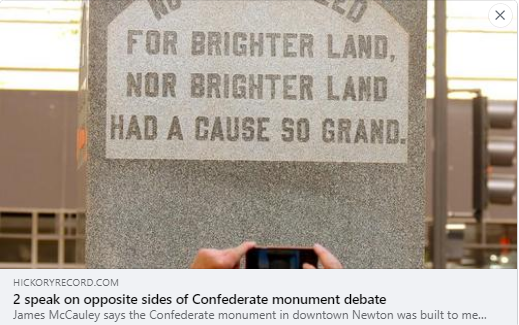 (WASHINGTON D.C., 7/14/2021) – The Council on American-Islamic Relations (CAIR), the nation’s largest Muslim civil rights and advocacy organization, today supported the removal of a statue dedicated to the “grand cause” of the confederacy in Newton, N.C., and apparent hate vandalism of a “Black Lives Matter” sign in Holly Springs, N.C. Police say a man took the sign from a front yard and smeared it with feces.

In Newton, N.C., the Confederate monument was debated at a meeting of the Catawba County Board of Commissioners Monday, with some members of the public supporting removal and others urging the board to keep it on display.

The efforts to have the statue removed were started by the Catawba County Truth and Reconciliation Committee, who say Confederate monuments on public property pose a threat to public safety and are inconsistent with the principle of equal protection under the law. The committee has created a petition to remove the statue, which now has 1,385 out of 1,500 signatures.

SEE: 2 speak on opposite sides of Confederate monument debate

“When a society honors traitors, racists and white supremacists, targeting of minority communities will be the inevitable result,” said CAIR National Communications Director Ibrahim Hooper. “We repeat our call to remove every monument to Confederate racism in North Carolina and urge community leaders to denounce all acts of hate.”