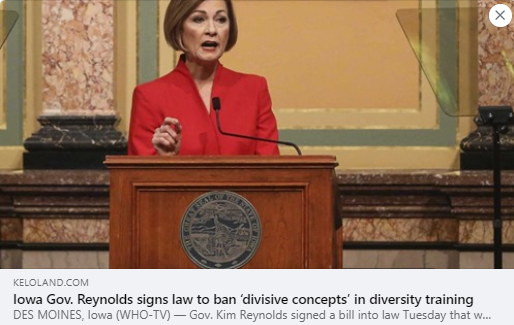 (WASHINGTON, D.C., 6/9/2021) – The Council on American-Islamic Relations (CAIR), the nation’s largest Muslim civil rights and advocacy organization, today renewed its condemnation of another effort at the state level to ban anti-racism teaching in schools after Iowa Gov. Kim Reynolds signed a bill into law that bans “divisive topics” from being taught in schools and government entities.

The new law is part of a nationwide effort, promoted by ex-president Trump, to ban the teaching of critical race theory (CRT) concepts. CAIR condemned the legislation when it was introduced earlier this year.

“This was wrong when it was introduced and it is wrong now to ban important discussion of the systemic anti-Black racism and white supremacy that continues to harm our nation,” said CAIR Government Affairs Director Robert McCaw.