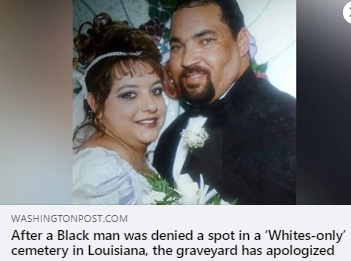 (WASHINGTON, D.C., 1/29/2021) – The Council on American-Islamic Relations (CAIR), the nation’s largest Muslim civil rights and advocacy organization, today condemned a Louisiana cemetery that refused to bury a Black man because he was not white and similarly condemned white supremacist graffiti at a Kentucky university.

In Allen Parish, La., Oaklin Springs Cemetery refused to sell a plot to a family wanting to bury their father, 55-year-old Deputy Darrell Semien. The cemetery produced a contract drafted nearly 70 years ago that states it only offers white people, “the right of burial of the remains of white human beings.”

The staff reportedly told the family, “There’s no coloreds allowed.” The president of Oaklin Springs Cemetery later publicly apologized for the remarks of his staff. The family of Deputy Semien said this cemetery was chosen to honor their father’s wishes to be buried close to home.

SEE: After a Black man was denied a spot in a ‘Whites-only’ cemetery in Louisiana, the graveyard has apologized

“It is sad that anti-Black racism and white supremacy continue even after death in our nation,” said CAIR National Communications Director Ibrahim Hooper. “This disturbing incident should be a wake-up call for all those who deny the existence of systemic racism.”

In a statement, CAIR–Kentucky Board member and former Chair Waheedah Muhammad said:

“We urge all Americans to stand up and oppose the growing bigotry and extremism we are witnessing in our state and nationwide. Good people must speak louder than those who spread evil. As a Black American, I look forward to the day when America lives up to her aspirations for racial justice and equity for all her citizens.”

Muhammad said Washington-based CAIR and the American Muslim community are standing in solidarity with all those challenging anti-Black racism, Islamophobia, anti-Semitism, and white supremacy.