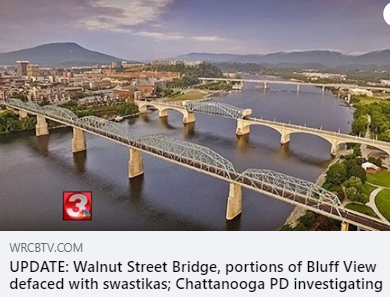 (WASHINGTON, D.C., 9/14/2020) – The Council on American-Islamic Relations (CAIR), the nation’s largest Muslim civil liberties and advocacy organization, today condemned both vandalism defacing the Walnut Street Bridge in Chattanooga, Tenn., with Nazi swastikas and a hate crime in which a woman allegedly left a racist card on at least two vehicles in Manitowoc, Wisc.

The Chattanooga Police Department is investigating the Tennessee vandalism to see if a hate crime can be filed.

In Manitowoc, someone reported finding a red card on their car that appeared to be a hunting license to hunt Black people and included a racial slur. Police are recommending charging the alleged perpetrator with one felony count of making terrorist threats-as a hate crime.

“We condemn any actions that threaten or target members of minority communities and urge swift action to show that Americans stand against anti-Black racism, anti-Semitism and white supremacist intimidation.”