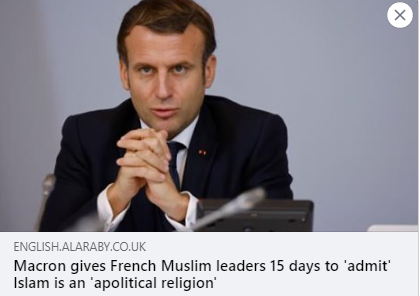 (WASHINGTON, D.C., 11/19/2020) – The Council on American-Islamic Relations (CAIR), the nation’s largest Muslim civil rights and advocacy organization, today condemned French President Emmanuel Macron’s attempt to dictate the principles of the Islamic faith after he issued an ultimatum to French Muslim leaders to draw up a charter in 15 days that would falsely state that Islam is an “apolitical religion.”

Macron has given the French Council of Muslim Worship (CFCM) two weeks to draw up a charter of “republican values” that must include a statement that Islam in France is a religion having nothing to do with politics.

[NOTE: CAIR and other American Muslim organizations and institutions are actively involved in promoting Muslim civic engagement and political participation. SEE: https://muslims.vote/ American Muslim voters and candidates were active in the recent state and national elections.]

“The French government has no right to tell Muslims or any other religious minority how to interpret their own faith. President Macron must reverse course before his nation returns to the colonial racism and religious bigotry that haunted so many European nations for centuries. President Macron is turning ‘Liberté, égalité, fraternité’ into ‘repression, inequality and division.’

“Although France claims to uphold religious freedom, the truth is that French Muslims do not have the First Amendment protections enjoyed by people of faith in America. It is therefore our duty to speak out in defense of their religious rights and freedoms.”

President of France Emmanuel Macron delivered a speech about the French Muslim community in which he claimed that ‘Islam is a religion that is in crisis all over the world today, we are not just seeing this in our country’ and has expressed concern of ‘Islamic separatism’ and called to ‘liberate’ Islam.