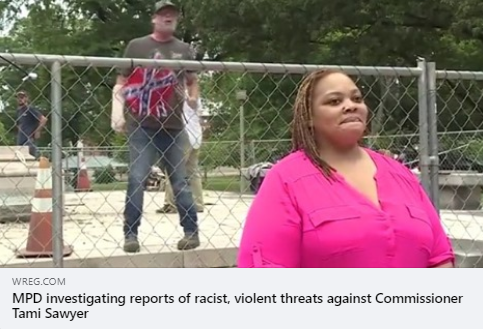 Washington, D.C., based CAIR also supported an NAACP call to remove a Confederate memorial in Virginia.

In Tennessee, local media captured an allegedly threatening altercation between a member of Confederate 901 and Shelby County Commissioner Tami Sawyer during removal of the remains. The Memphis Police Department is investigating the incident. Sawyer says she also received threats on social media.

Earlier this year, CAIR condemned as “pro-Confederate” a bill in the Tennessee Senate that would replace every member of a state board that voted to remove a bust of Forrest from the State Capitol.

In Virginia, King George County officials will consider removing a Confederate memorial from the lawn of the county’s courthouse. Chairwoman Annie Cupka directed staff “to determine the cost of the relocation and to work with community groups to raise the necessary funding.”

King George NAACP Vice President Robert Ashton Jr. asked the board to remove the monument, which has been at the courthouse since 1976.

“Those calling for the removal of monuments to slavery, anti-Black racism and white supremacy must be supported by all Americans who want our nation to move forward with justice and equality for all,” said CAIR National Communications Director Ibrahim Hooper.