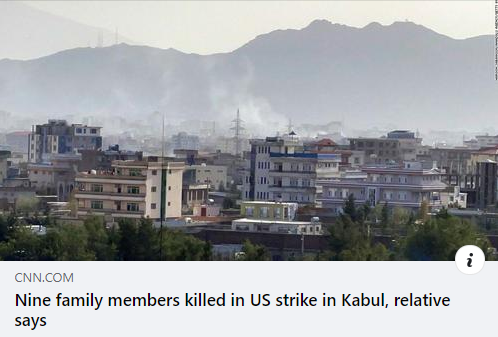 (WASHINGTON D.C., 8/30/2021) – The Council on American-Islamic Relations (CAIR), the nation’s largest Muslim civil rights and advocacy organization, today condemned the reported killing of 10 Afghan civilians, including seven children, in a U.S. drone attack in Kabul, called for a transparent investigation, and called for the Biden administration to severely limit the use of drone warfare due to its “longstanding pattern” of causing civilian deaths.

Media reports indicated that the civilians were killed when an American drone targeted a vehicle in Kabul on Sunday.

US drone strike kills 10 civilians, including children, in Kabul: reports

“Enough is enough. For more than ten years, our government’s drone strikes have killed thousands of innocent people in Pakistan, Afghanistan, Yemen, and elsewhere in the Muslim world–destroying family homes, wedding parties and even funeral processions. The civilian casualties in Kabul are simply the latest victims of this misused technology.

“The Biden administration should impose a moratorium on drone warfare until the government establishes strict oversight rules that would prevent these tragedies by severely limiting and transparently accounting for our military’s use of drone warfare.”

On Friday, CAIR expressed condolences for those killed in the attack at Kabul Airport.

He noted that CAIR has expressed solidarity with the Afghan-American community and called on the Biden Administration to do everything possible to welcome Afghan refugees to the United States while protecting Afghan civilians.