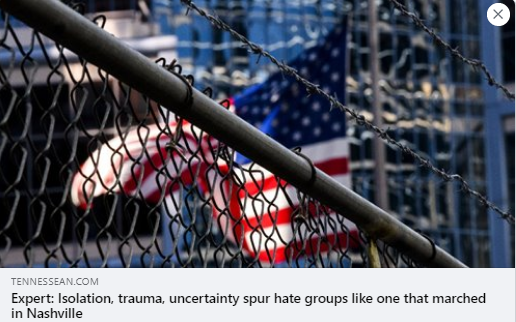 The group, Patriot Front, marched through downtown Nashville with American flags bearing a fasces, the symbol of Italian fascism. They are known for flash-mob style demonstrations and are classed as a hate group by the Southern Poverty Law Center.

“We condemn this disturbing public display of white supremacy and racial hatred,” said CAIR Research & Advocacy Coordinator Huzaifa Shahbaz. “Our elected officials and leaders must join with communities across the country in condemning the abhorrent actions of hate groups and push back against the rising tide of bigotry and racism.”

CAIR has previously condemned the flying of a banner featuring racist and derogatory wording in Idaho for which Patriot Front claimed responsibility.

CAIR’s Kentucky chapter has condemned an act of racist vandalism in which the words ‘Patriot Front’ were spray-painted on Northern Kentucky University campus.

The American Muslim community and CAIR stand in solidarity with all those challenging anti-Black racism, xenophobia, Islamophobia, anti-Semitism, white supremacy and all other forms of bigotry.