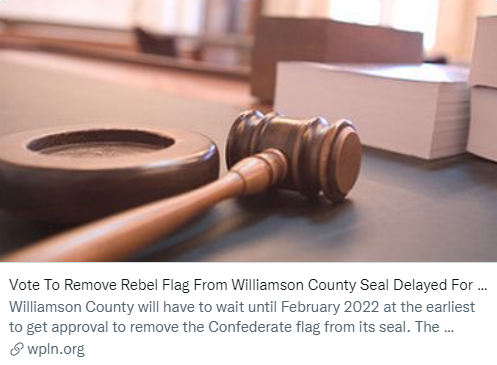 (WASHINGTON D.C., 8/30/2021) – The Council on American-Islamic Relations (CAIR), the nation’s largest Muslim civil rights and advocacy organization, today decried a delay in the vote to remove the Confederate flag from the seal of Williamson Co., Tenn.

The county mayor and other officials decided to remove the seal in October 2020, an action that would require approval from the Tennessee Historical Commission. The commission was set to vote on the issue this October but will now have to wait until February 2022 at the earliest due to a request for continuance by the Sons of Confederate Veterans (SCV).

The SCV is considered an interested party in the matter, giving them the right to request a delay under Tennessee’s Heritage Protection Act. The act was passed in 2013 to protect Confederate monuments and symbols and was authored by a member of the SCV. Williamson County did not agree to the continuance, but it was granted by a judge.

“The Confederate flag represents slavery, systemic anti-Black racism, and white supremacy, and has no place on symbols of government,” said CAIR National Communications Coordinator Ismail Allison. “We decry the stalling of the process of removing this symbol of hate from a county seal and urge county officials to remain steadfast in opposing this legacy of racism and white supremacy.”