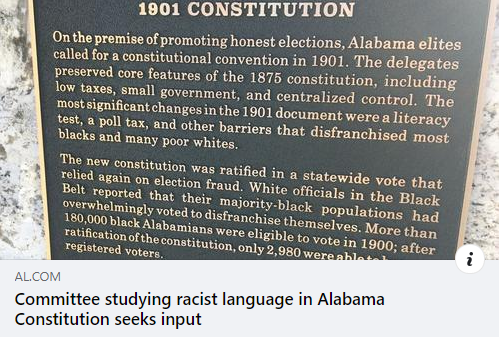 (WASHINGTON D.C., 8/30/2021) – The Council on American-Islamic Relations (CAIR), the nation’s largest Muslim civil rights and advocacy organization, today welcomed both efforts to remove racist language from Alabama’s constitution and the removal of a photo featuring a man making a racist gesture from the American Fork, Utah, police department’s Facebook page.

Alabama’s Committee on the Recompilation of the Constitution is seeking input from the public on removing racist language from the state’s constitution. The committee will hold a public meeting Thursday to discuss the topic. Voters approved a constitutional amendment authorizing the effort in November 2020. The Alabama constitution, ratified in 1901, includes provisions designed to preserve white supremacy, including sections mandating segregated schools, poll taxes, and slavery as punishment for a crime.

A group photo in which a man wearing a Proud Boys hat flashed the ‘OK’ hand gesture, often used by white supremacists, was removed from the Facebook page of the American Fork Police Department after some backlash. On Sunday, the department issued a statement condemning the gesture and apologizing for the post. “Please know that American Fork Police Department would not have posted that photo if we realized it contained that gesture/sign,” they said.

“Any effort or action to remove the harmful remnants of our nation’s legacy of systemic anti-Black racism and to repudiate white supremacy must be supported by Americans of all faiths and backgrounds,” said CAIR National Communications Director Ibrahim Hooper.