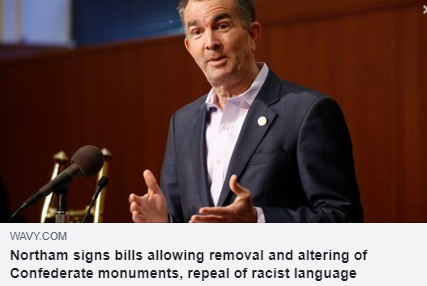 In February, CAIR expressed support for the effort to repeal the racist language from the Acts of Assembly. Examples of discriminatory language included laws banning school integration and prohibiting people of different races living in the same neighborhoods.

In March, the Washington-based Muslim civil rights organization supported legislation that would give localities the autonomy to “remove, relocate, contextualize, cover or alter” confederate monuments.

“We welcome Governor Northam’s signing of these bills into law and hope this action by lawmakers in Virginia sends a strong message to other state legislatures that symbols of racism and remnants of our nation’s segregated past must be repudiated and removed from the public sphere.”

He noted that CAIR has repeatedly urged the removal of Confederate symbols and racist laws nationwide.