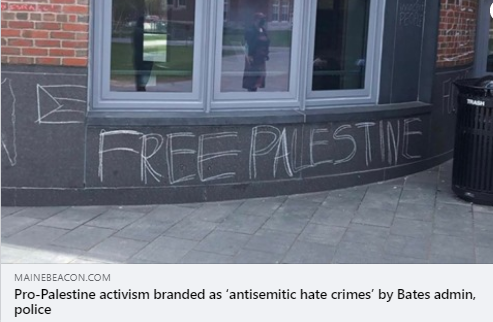 On May 10, the Bates Leftist Coalition, a student political organization, posted images of pro-Palestinian chalk drawings to their Instagram. The administration condemned the drawings as anti-Semitic, and contacted Lewiston police to investigate the chalking, which were then referred to the Maine Attorney General’s office as a hate crime. The attorney general’s office did not proceed with an investigation.

“The attempt by the Bates College administration and Lewiston police to silence legitimate criticism of Israeli human rights abuses and war crimes is unacceptable,” said CAIR National Communications Director Ibrahim Hooper. “We welcome the decision of the Maine Attorney General’s office not to pursue a hate crime investigation of this incident, and we call on leaders and law enforcement across the country to uphold the First Amendment rights of everyone to voice their support for the Palestinian people.”

CAIR has previously opposed attempts to suppress criticism of Israel on college campuses.

CAIR’s Los Angeles chapter has called on the USC administration to protect the free speech of students criticizing Israel and Zionism.