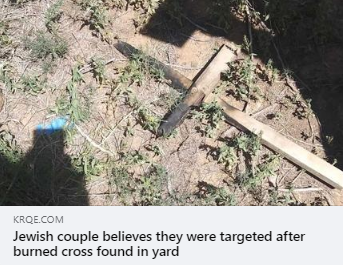 (WASHINGTON, D.C., 8/26/2021) – The Council on American-Islamic Relations (CAIR), the nation’s largest Muslim civil rights and advocacy organization, today expressed solidarity with the Jewish community in New Mexico after a cross was burned at a Jewish family’s home in that state.

CAIR said that family believes they were targeted because of their faith. [NOTE: Cross burning is a racist intimidation tactic associated with the Ku Klux Klan (KKK).]

SEE: Jewish couple believes they were targeted after burned cross found in yard

“American Muslims are in solidarity with members of the Jewish community in New Mexico and nationwide as they and all other minority communities face the challenge of rising bigotry,” said CAIR National Communications Director Ibrahim Hooper. “Political and religious leaders must speak out strongly against anti-Semitism and all other forms of hate.”

He noted that earlier this week, CAIR welcomed an 18-month federal prison sentence for a man who burned a cross on a Black family’s lawn in Marion, Va.