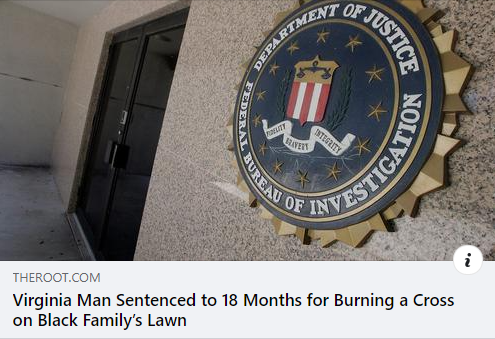 (WASHINGTON D.C., 8/23/2021) – The Council on American-Islamic Relations (CAIR), the nation’s largest Muslim civil rights and advocacy organization, today welcomed an 18-month federal prison sentence for a man who burned a cross on a Black family’s lawn in Marion, Va.

On June 12, 2020, police responded to reports of a fire coming from a barrel on the family’s front lawn. The FBI launched a hate crime investigation into the case, and the perpetrator was charged with lying to federal agents and “criminal interference with fair housing based on the victim’s race.”

The perpetrator pleaded guilty to the latter charge in April. He admitted that he burned the cross intending to intimidate and threaten the family. He was known to call members of the family racial slurs.

One of the family members is a member of a Virginia civil rights group that had organized a protest in response to the killing of George Floyd the day before the cross burning.

“This appalling crime, which recalls the kind of terrorism faced by the Black community throughout the Jim Crow era, reminds us that racist hate is still with us,” said CAIR National Communications Director Ibrahim Hooper. “We welcome the sentencing of the perpetrator and urge law enforcement to take every hate crime case seriously and apply appropriate charges and punishments.”