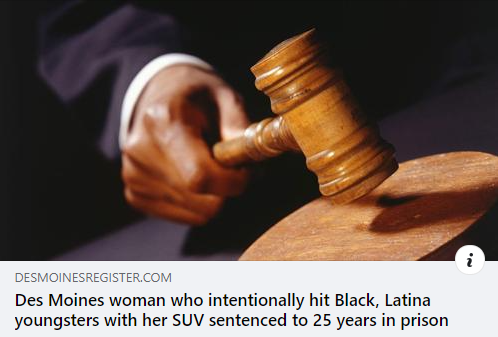 (WASHINGTON D.C., 8/20/2021) – The Council on American-Islamic Relations (CAIR), the nation’s largest Muslim civil rights and advocacy organization, today welcomed a 25-year prison sentence for a woman who intentionally hit Black and Latina children with her SUV in Iowa.

The woman was sentenced yesterday, four months after pleading guilty to two charges of attempted murder.

On December 9, 2019, the woman struck a 12-year-old boy with her SUV in Des Moines, Iowa. Half an hour later, she struck a 14-year-old girl with the vehicle in Clive, Iowa. She was arrested at a gas station later that evening after police received reports that she was stealing items. She also allegedly used slurs targeting Middle Eastern people against an employee and customers.

The woman’s state public defender said she was schizophrenic and had been influenced by far-right media. He said she was not taking her medication at the time of the attack out of fear it would affect her pregnancy and was instead self-medicating with methamphetamine, marijuana, and alcohol. The state public defender also explained that while the woman was mentally ill, she was not clinically insane.

SEE: Des Moines Woman Who Attacked Children with SUV gets 25 years in Prison

He noted that in 2019, CAIR called for a hate crime charge against Franklin, citing what it said is a rise in hate crimes against Latinos across the country since Donald Trump was elected president.