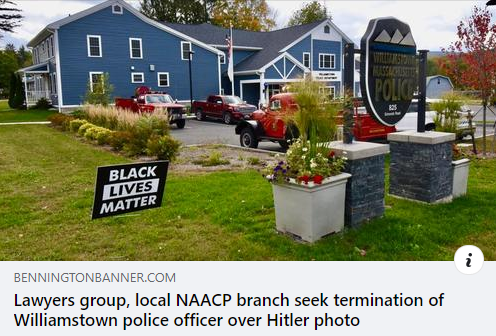 (BOSTON, MA, 8/20/2021) – The Massachusetts chapter of the Council on American-Islamic Relations (CAIR-MA) today joined the NAACP in calling for the termination of a Williamstown, Mass., police officer who kept a photo of Adolf Hitler in his locker.

During the last two weeks, the interim town manager of Williamstown received two letters calling for the officer to be fired because of the photo, which was removed from his locker two years ago after the police department moved to a new building. The photo remained in the officer’s locker for years.

A letter sent to the interim mayor by the NAACP said the picture was “abhorrent and reprehensible” and was in “direct violation of Department policy.” The NAACP said there were “other incidents involving [the officer] which reinforces the NAACP’s demand for his termination,” including “his sexual assault of a Williamstown resident in 2011 and his subsequent placement on the Berkshire DA’s ‘do-not-call’ list,” which consists of officers disqualified from testifying on behalf of the state.

The officer claims the photo was not an expression of his political beliefs, and that it originated from an inside joke with another officer. The interim town manager said the town’s Select Board would be drafting a letter in response to the two requests for the officer’s termination.

“The appalling behavior of this officer is more than enough to warrant termination,” said CAIR-MA Executive Director John Robbins. “Law enforcement officials must be held to a higher standard than ordinary citizens, and it is time for agencies to start doing that.”

Robbins said the American Muslim community and CAIR stand in solidarity with all those challenging anti-Black racism, xenophobia, Islamophobia, anti-Semitism, white supremacy, and all other forms of bigotry.