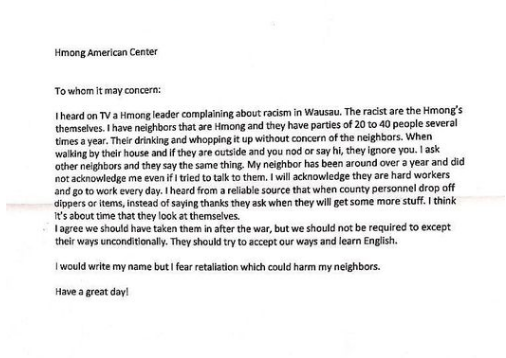 The anonymous letter called Hmong-Americans “racist,” and said they should “try to accept our ways and learn English.” The letter also expressed annoyance at “parties of 20 to 40 people several times a year” hosted by Hmong-Americans and criticized them for not greeting neighbors.

The executive director of the Wausau Hmong Community Center posted the letter to social media and invited the author to have a conversation about Hmong culture. Speaking to the media, he said the Hmong community has faced an increase in attacks and harassment over the past year. The executive director also said the recent controversy surrounding a “Community for All” resolution, which was adopted by Marathon County leadership last week, contributed to the rise in bigotry.

The resolution affirms that the county is welcoming to members of minority groups and accepts and celebrates diversity while condemning racism and bigotry.

“White supremacy and racism pose a threat to minority communities nationwide,” said CAIR National Communications Director Ibrahim Hooper. “We stand in solidarity with the Hmong community and with all those targeted by racist harassment and intimidation.”