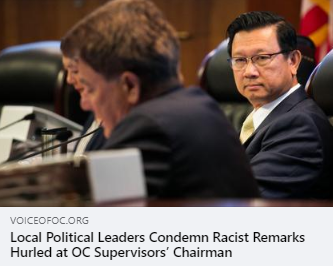 (LOS ANGELES, CA – 8/11/2021) – The Greater Los Angeles Area office of the Council on American-Islamic Relations (CAIR-LA) today condemned the racist, xenophobic and bigoted rhetoric used against Orange County Board of Supervisor Andrew Do.

During the public comment portion of a Supervisorial Meeting on July 27 , an attendee who identified himself as Tyler Durden – a fictional character from the movie Fight Club – referred to Supervisor Do as a “parasite” and told him “You come to my country, and you act like one of these communist parasites, I ask you to go the f*** back to Vietnam.” His racist comment was followed by applause from the crowd.

“This is another example of the rampant rise of anti-AAPI hate rhetoric in Orange County. As a community that believes in equity and justice, we have a moral responsibility to speak out and condemn all forms of hate that have been aimed towards Supervisor Do and the AAPI community,” said Hussam Ayloush, Executive Director of CAIR-LA.

“I am here to speak out against the racist, bigoted, xenophobic and anti-AAPI rhetoric that was spewed out against Chairman Do at the recent Board of Supervisors meeting. CAIR-LA wants to make it clear that racism, bigotry, xenophobia and anti-AAPI hate should have no space in Orange County, regardless of where one falls on the political spectrum.”

CAIR-LA has been part of several rallies in Orange County to raise awareness of the rise of AAPI hate. These rallies have been attended by hundreds of members of the AAPI community.