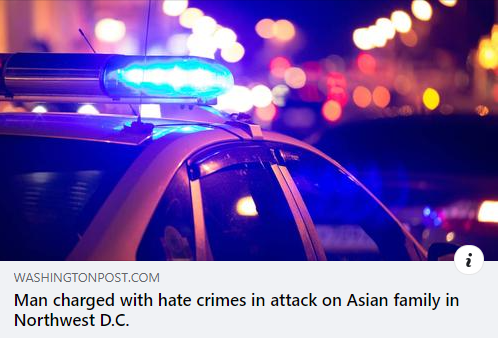 The alleged victims, a man and his parents, were reportedly approached by a man who shouted expletives and “You are not Americans!” and “You don’t belong here.” The man allegedly knocked the son and his mother to the ground. All three victims were injured in the assault. Police charged Patrick Joseph-Miller Trebat, 38, with three counts of bias-related crime, two counts of assault with significant bodily injury and one count of assault.

“These hate attacks on Asian-Americans and members of other minority communities nationwide must stop. We welcome the hate crime charges in this disturbing case and express our solidarity with the Asian-American community and all other communities targeted by bigotry.”

Yesterday, CAIR called for an investigation into a possible bias motive for a fire at a Washington, D.C., Turkish restaurant that was previously targeted with hate graffiti and is seeking security camera footage from nearby buildings.