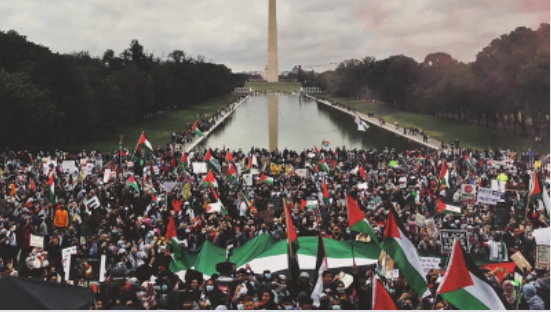 (WASHINGTON, D.C., 5/17/22) – The Council on American-Islamic Relations (CAIR), Jewish Voice for Peace, and National Students for Justice in Palestine (National SJP) today released a joint statement reaffirming their “unwavering support of the Palestinian cause for justice and liberation.”

They unequivocally condemned the “baseless allegations” made against them by the Anti-Defamation League (ADL), which falsely conflated their criticism of the government of Israel’s human rights violations and state discrimination against Palestinians with anti-Jewish racism.

The ADL has also led recent campaigns to undermine international human rights organizations like Amnesty International, Human Rights Watch and B’Tselem for their respective reports that have designated Israel as an apartheid state.

The movement for Palestinian rights will not be silenced – SJP, CAIR and JVP respond to ADL attacks

At a time when the movement in solidarity with Palestinian liberation is unprecedented in its support — and facing increased attack — the Council on American Islamic Relations, Jewish Voice for Peace and National Students for Justice in Palestine reaffirm our unwavering support of the Palestinian cause for justice and liberation. We unequivocally condemn the baseless allegations by the Anti-Defamation League (ADL) against our organizations, and are gravely concerned that the ADL’s attacks will distract from the real threat of white supremacy faced by all our communities.

The ADL’s latest intimidation campaign is based on a highly problematic definition of antisemitism that attempts to conflate criticism of the Israeli government or Zionism with anti-Jewish racism. This is as dangerous as it is baseless. Many people of various faiths and backgrounds–including Jewish scholars, rabbis, and activists–have long criticized and opposed Zionism. For the Palestinian community, Zionism is the political ideology that has enabled their violent subjugation and systematic dispossession. People must be able to discuss and debate these issues without being falsely smeared as anti-Semites.

This latest escalation by the ADL against our organizations is further proof of the ADL’s desperation. The ADL has long worked to secure total impunity for the Israeli government. But poll after poll shows that they are losing ground, as Americans increasingly support equal rights for Palestinians. This includes the Jewish American community, where there is significant condemnation of Israel’s apartheid regime, especially in younger generations, as well as with a large majority of Democrat voters.

The ADL’s attack on our organizations is only the most recent in its long history of campaigns aimed at strengthening the forces of institutional racism while surveilling and undermining social justice organizations.  From illegally spying on nearly 10,000 individuals and 600 social justice organizations – including the NAACP, the Arab American Anti-Discrimination Committee and the African National Congress – to advising US law enforcement on infiltrating anti-racist organizers, the ADL’s actions on the ground have always contradicted its claims of working for justice.  The ADL is clearly not a civil rights organization. It has been and continues to be deeply harmful to our communities and movements for justice.

The ADL’s latest bullying campaign has just begun – to which we reply: We are ready, our people are ready, the movement is ready.  Our commitment to the right of Palestinians to live in freedom and dignity is resolute.  We are not intimidated, and the movement for Palestinian rights will not be silenced.

Jewish Voice for Peace is a national, grassroots organization inspired by Jewish tradition to work for a just and lasting peace according to principles of human rights, equality, and international law for all the people of Israel and Palestine.

National Students for Justice in Palestine (National SJP) is a collective of student organizers that supports over 200 Palestine solidarity organizations on college campuses across occupied Turtle Island (U.S. and Canada). We aim to develop a student movement that is connected, disciplined, and equipped with the tools necessary to build grassroots momentum for Palestinian liberation.