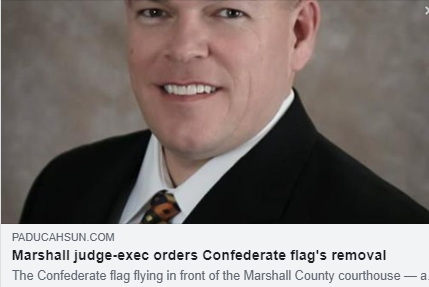 (LEXINGTON, KY, 4/18/20) – The Kentucky chapter of the Council on American-Islamic Relations (CAIR-Kentucky), a chapter of the nation’s largest Muslim civil rights and advocacy organization, today welcomed the removal of a Confederate flag outside of the Marshall County courthouse in Western Kentucky.

Judge-Executive Kevin Neal wrote in a statement: “We value the thoughts and opinions of our citizens when dealing with controversial issues which has led us to taking down the flags (Friday) and letting the Fiscal Court discuss the proper location.”

Earlier this month, CAIR-Kentucky called for the flag’s removal.

“We welcome the removal of this symbol of racism, white supremacy and treason from public property and hope any decision about future memorials will only be made after input from all segments of the local community.”

She noted that CAIR has called for local governments throughout the nation to remove all Confederate symbols from public spaces.