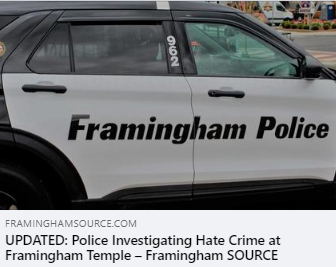 “Massachusetts Muslims stand in solidarity with the Jewish community in Framingham and across the state,” said CAIR-MA Executive Director Dr. John Robbins. “Desecration of any house of worship is always appalling, but especially so in this instance as our Jewish neighbors are celebrating the high holy days of Judaism.  We hope that the outpouring of support from the Framingham community and beyond offers some measure of comfort to Temple Beth Sholom.”

He said the American Muslim community and CAIR stand in solidarity with all those challenging anti-Asian and anti-Black racism, xenophobia, Islamophobia, anti-Semitism, white supremacy, and all other forms of bigotry.

Just two days ago, CAIR condemned anti-Semitic vandalism at the home of a Jewish family in New Mexico.