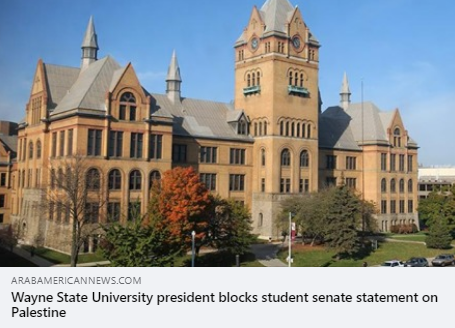 (CANTON, MI, 6/8/21) – The Michigan chapter of Council on American-Islamic Relations (CAIR-MI), a chapter of the nation’s largest Muslim civil rights and advocacy organization, today said it is troubled by complaints of censorship by Wayne State University President of a statement by the Student Senate condemning the recent violence of the Israeli military against Palestinian civilians.

That statement by the Wayne State University Student Senate was blocked by university president Roy Wilson from being disseminated through the university’s email listserv, which reaches faculty and students.

The statement, which condemned all forms of anti-Semitism, Islamophobia, and violence against Israeli and Palestinian people as well as the use of American tax-payer dollars in the recent bombing of Gaza was dubbed by Wilson as “needlessly inflammatory language.”

Wilson said his reason for blocking the distribution of this statement, though other Student Senate statements are disseminated through the listserv without incident, was because all students within the body did not agree with the statement.

“We are troubled by Wayne State University President Roy Wilson’s censorship of the Student Senate statement condemning recent Israeli violence perpetrated against Palestinian civilians,” said CAIR-MI Executive Director Dawud Walid. “The suppression of students’ free speech rights — even if some disagree with their political views — runs counter to the stated ethos of the university, which offers liberal arts education and purports to have an environment in which ideas are allowed to be rigorously debated.”

Walid added that Wilson’s censorship of the statement runs counter to the democratic process, as there is no policy nor expectation that statements must receive unanimous vote with the Student Senate before being approved and disseminated.  He also said such censorship will further alienate Muslim students on campus who already hold the view that university has a history of quelling the voices of those who speak up on behalf of Palestinian rights.