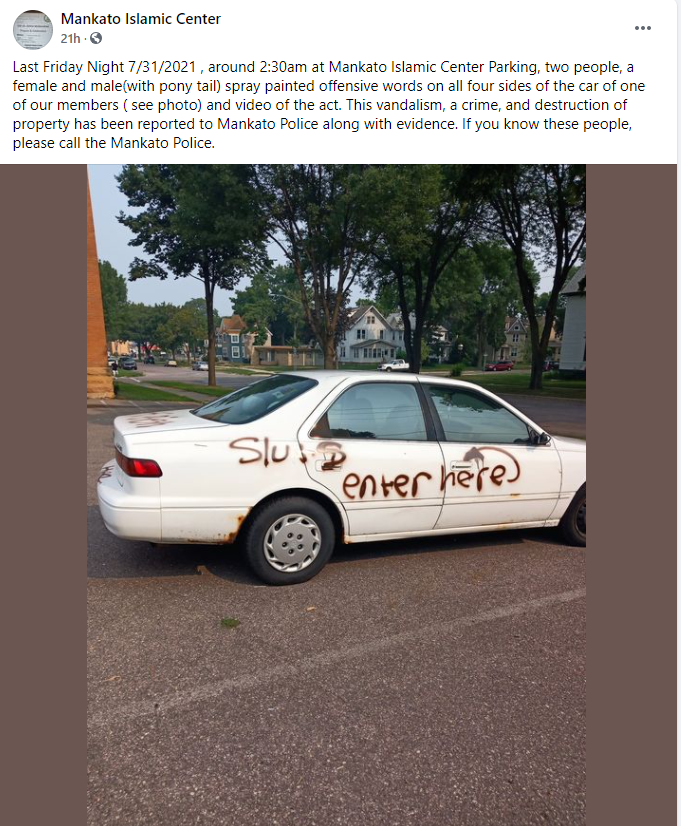 Officials with the Mankato Islamic Center reported to CAIR-MN that two vandals spray-painted hate messages on a car owned by one Islamic Center member. The vandalism was captured on surveillance video and that video has been turned over to law enforcement.

“We call on local, state and federal law enforcement authorities to investigate a possible bias motive for this vandalism targeting a worshiper’s vehicle,” said CAIR-MN Executive Director Jaylani Hussein. “We are seeing increased hate crimes against Muslims in rural communities and are asking community and faith leaders to condemn this rise in hate crimes targeting Minnesota mosques.”

Hussein noted that on Friday, CAIR-MN called on the FBI to investigate a potential threat to a Moorhead mosque after learning that a man sentenced for hate vandalism of that house of worship was affiliated with a hate group.

In July, CAIR and 23 Democratic members of Congress called on President Joe Biden and Secretary of State Antony Blinken to appoint a Special Envoy to Monitor and Combat Global Islamophobia.