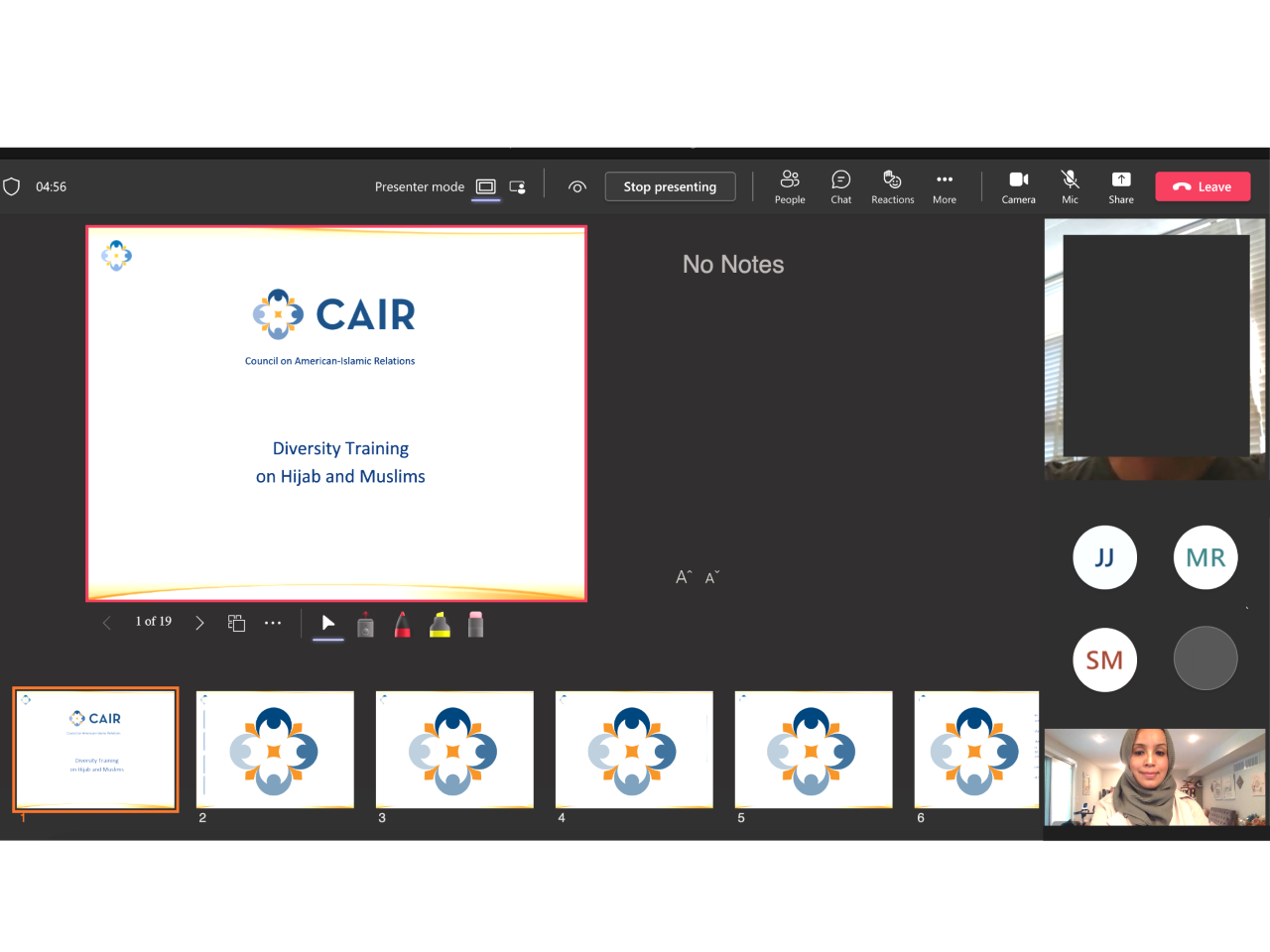 (BALTIMORE, MD, 6/17/2022) – Earlier this week, the Maryland office of the Council on American-Islamic Relations (CAIR), the nation’s largest Muslim civil rights and advocacy organization, held a diversity training for more than 600 students and staff at a public school in Baltimore County in response to a series of recent incidents within that school where Muslim students’ hijabs, or Islamic headscarves, were forcibly removed by other students.

CAIR’s presentation focused on the significance of the hijab and the importance of respecting articles of faith including the hijab, the Sikh head covering (patka) and Jewish skullcap (kippah).

The civil rights group has received a number of complaints this year in which Maryland Muslim students have been harassed or bullied because of their religious attire. In April, the Maryland office called for stepped up security measures after Muslim students who wear hijab were reportedly harassed by a male student at the University of Maryland College Park.

“We encourage other schools to proactively follow this school’s example of offering similar diversity trainings to help ensure a safe and inclusive learning environment for students of all faiths,” said CAIR Office in Maryland Director Zainab Chaudry. “CAIR acknowledges the school administrators who worked with us to coordinate this presentation, and especially applauds the courage of Muslim students and families who spoke up to report the incidents. Their voices enable us to effectively advocate for our communities and collaborate with school systems to take appropriate measures.”

“When my daughter told me that this happened to her again, I was so upset and thought to myself that this cannot be real,” said BCPS parent Leila Seif, who’s daughter’s hijab was forcibly removed two times in a matter of months at the school where the training was held. “The second time, the school notified me right away, so I was happy with their communication. After speaking with CAIR and coming up with a solution, the school was willing to work with us and be a means of support. For that, I am extremely thankful. I really hope [the targeting of students who wear hijab] comes to an end, and that if it does happen to another girl, she has the courage to speak up like my daughter did.”

A recent study published by CAIR-CA shows that a very high level of Muslim students feel unsafe at schools. Some 55% of all respondents surveyed reported feeling unsafe, unwelcome, or uncomfortable at school because of their Muslim identity.

In April, CAIR released its latest report on the civil rights of American Muslims, titled “Still Suspect: The Impact of Structural Islamophobia,” detailing more than 6,700 civil rights complaints – including 177 school incidents – the Washington, DC, based group received in the past year.