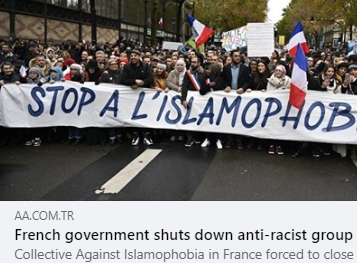 (WASHINGTON, D.C., 12/4/2020) – The Council on American-Islamic Relations (CAIR), the nation’s largest Muslim civil rights and advocacy organization, today announced that it has offered office space in its Capitol Hill headquarters in Washington, D.C., to a French Muslim anti-racism organization recently shut down by that nation’s government in a crackdown on the Muslim community and its legal rights.

CAIR said it has offered the office space and logistical resources to the Collective Against Islamophobia in France (CCIF), which French Interior Minister Gerald Darmanin falsely accused of spreading “Islamist propaganda.” In fact, CCIF’s main function was monitoring growing Islamophobia in France.

In less than three months, the French government enacted a series of anti-Muslim measures that violated the rights of religious freedom of French Muslims.

Despite not having any evidence, Darmanin announced a broad crackdown of up to 80 mosques suspected of “separatism.” Darmanin has also stated that foreign families that disagree with the display of caricatures of the Prophet Muhammad in schools might face deportation. Macron’s government, which supposedly values freedom of speech, has created a double standard by singling out French Muslims and questioning their legitimacy as French citizens. Macron is also coercing a body of Muslim leaders to accept a charter of “Republican Values” to prove their loyalty to France.

“The French Muslim community and its civil organizations are being unjustly pressured and bullied by their government.

“The dissolution of the CCIF is not based on any legal ground and creates a dangerous precedent. In essence, the French government bizarrely believes that criticizing its Islamophobic policy is, in and of itself, an incitement to terrorism.

“Targeting human rights organizations like CCIF — at the expense of the rule of law — is only the tip of the iceberg. In an unprecedented move, the French government wants to criminalize and dissolve any organization that disagrees with its plan to control Muslims, by labeling them as ‘separatists.’

“A planned law on separatism focuses solely on Muslims and will allow the government to impose its pre-approved imams (Islamic religious leaders), tax Muslims’ finances (through Hajj) and deny Islamic organizations any sense of agency.

“The disturbing developments in France should be of concern to people of all faiths and backgrounds worldwide who value freedom and justice.

“We hope CCIF may be reconstituted and carry on important work challenging hate in France, even when that work must be carried out in another country like the United States where domestic laws guarantee free speech and religious rights.”

Last month, CAIR condemned French President Emmanuel Macron’s attempt to dictate the principles of the Islamic faith after he issued an ultimatum to French Muslim leaders to draw up a charter in 15 days that would falsely state that Islam is an “apolitical religion.”

[NOTE: CAIR and other American Muslim organizations and institutions are actively involved in promoting Muslim civic engagement and political participation. SEE: https://muslims.vote/ American Muslim voters and candidates were active in the recent state and national elections.]

President of France Emmanuel Macron delivered a speech about the French Muslim community in which he claimed that “Islam is a religion that is in crisis all over the world today, we are not just seeing this in our country” and has expressed concern of “Islamic separatism” and called to “liberate” Islam.