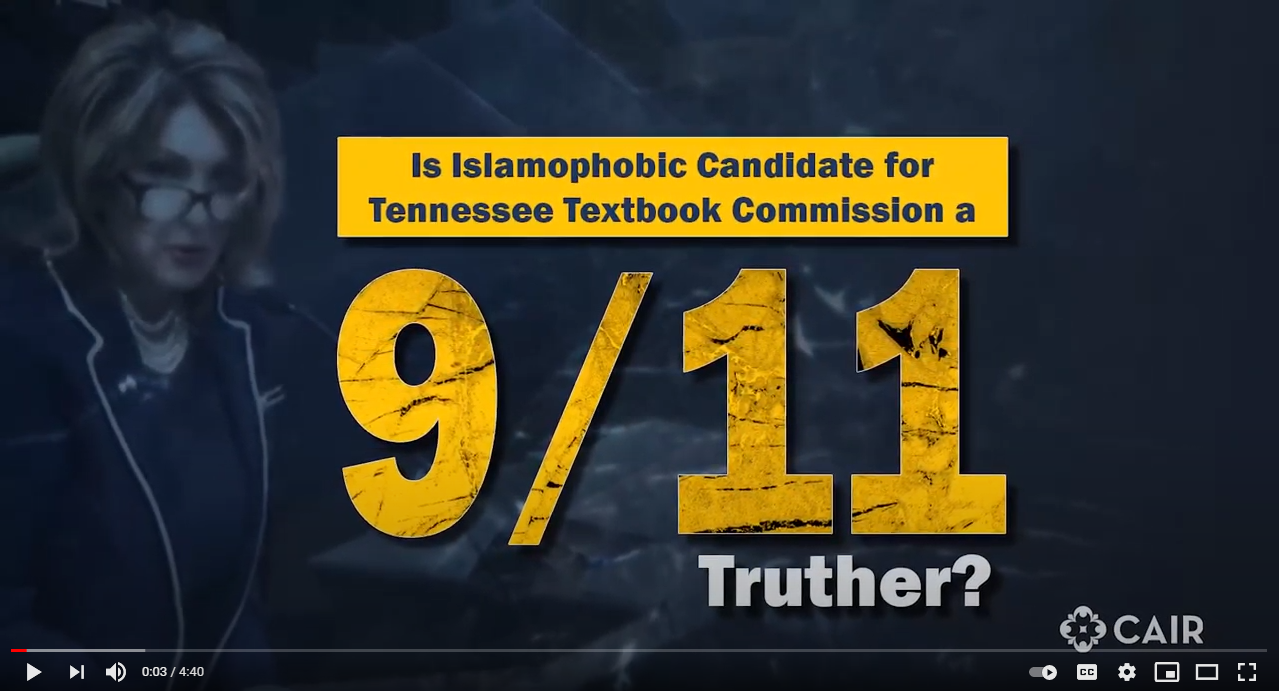 [NOTE: The 16-member commission oversees Tennessee’s list of textbooks and other educational materials recommended for use by public schools. Cardoza-Moore is already serving on the commission while awaiting confirmation.]

In her questioning of Cardoza-More, Sen. Akbari cited a textbook review from PJTN that seemed to promote the 9/11 truther hoax.

After referring to a textbook passage that said, “on September 11th, 2001, members of al-Qaeda carried out a terrorist attack on New York City, Washington, D.C., and Pennsylvania,” the PJTN report highlighted the phrase “members of al-Qaeda carried out.” The PJTN report stated: (page 23) “given the plethora of evidence, the reviewer suggests removing the underlined section of sentence. . .This is a highly contested (per architects and engineers for 9/11 Truth, and demolition experts) argument. . .There is ample evidence that refute the ‘official’ story of what was perpetrated that day.”

Akbari pressed Cardoza-Moore on these statements by her organization but did not receive a clear reply. “This person has peddled hate, anti-Muslim rhetoric, and a conspiracy theory about what happened on 9/11, the most tragic event the United States where 3,000 people died,” said Sen. Akbari.

In responding to another question by Sen. Akbari, Cardoza-Moore stood by her false 2010 statement that a mosque in Murfreesboro, Tenn., was a “terrorist training camp.”

“Someone with such bigoted, un-American and conspiratorial views should never be in charge of any state’s educational materials, which are designed to help shape young minds in a diverse society,” said CAIR Director of Government Affairs Department Robert S. McCaw. “We urge the Tennessee Senate to vote down this appointment as a clear sign that textbooks must reflect facts and reality, not conspiracy theories and hate.”

CAIR Research and Advocacy Coordinator Huzaifa Shahbaz said: “Her anti-Muslim comments and conspiratorial views should be nowhere near an educational institution. Our students deserve to have an education free from hate. The textbook commission needs to do a better job in fostering a healthy environment for our students — one that acknowledges diversity and cultural differences.”

PJTN initiatives include “Stop Access Islam.” Cardoza-Moore led opposition to a mosque in Murfreesboro, Tenn., and opposed a mosque in New York City. On “The Daily Show,” she falsely claimed that “30 percent” of Muslims “are terrorists.”

CNN: Laurie Cardoza-Moore is leading opposition to the Murfreesboro mosque

Video: Laurie Cardoza-Moore speech at the rally against Islamic Center in NYC (Aug. 22, 2010)

Cardoza-Moore says, “Islam is a political system of global domination,” that 30 percent of Muslims are terrorists and there are already 35 training camps in America.