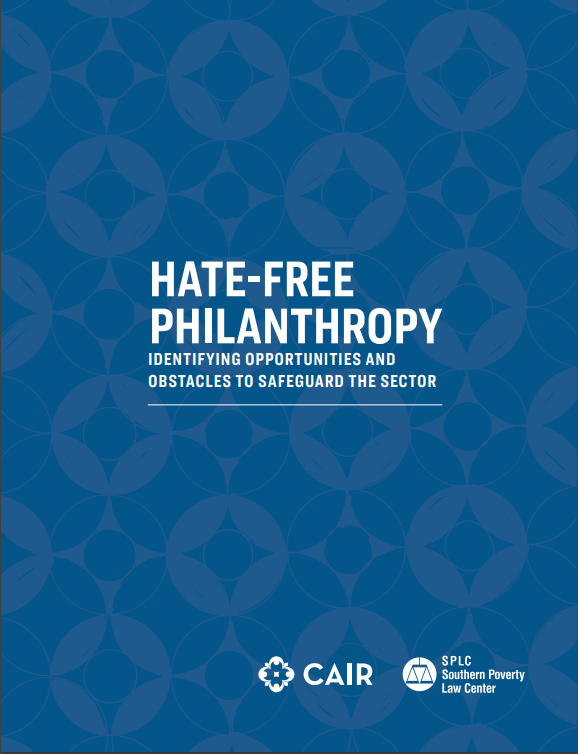 “Philanthropy is at a crossroads. With the growth of bias, discrimination, and violent hate crimes and white supremacist terror attacks affecting our communities, philanthropy has a responsibility to address hate both in society and in the sector itself.

“Community foundations, due to their ‘big tent’ local nature and civic missions, occupy a unique space in society, allowing them to transcend much of the polarized and fragmented nature of public life today. And while community foundations regularly combat social inequity, revelations that their charitable platforms have been used by special interest networks to funnel money to hate groups has resulted in more demands that the philanthropic sector take measures to insulate itself.

“As thought leaders in philanthropy have argued, even if the actual dollar amounts to hate groups from community foundations remain small in the context of the sector’s enormous contribution to the public good, those funds nonetheless contribute to the normalization of hate speech and activity. More importantly, hate-funding directly undermines the civic mission of community foundations by going against their values and harms the safety of the communities they represent.”

Key recommendations in the report include community foundations reasserting their role as “vanguards in establishing reforms that will curtail hate-funding,” supporting theHate is Not Charitable campaign and developing and implementing “standards and practices that align their donor agreements with the hate-free and anti-discrimination policies.”

“The findings of this research and consultation demonstrate that leaders across the charitable and philanthropic space recognize that hate funding and white supremacy are serious problems their sector must confront,” said CAIR National Research and Advocacy Director Abbas Barzegar. “Thankfully, the white paper also shows that these leaders are already taking strong and courageous steps towards confronting powerful special interest groups and stopping their subversion of charity and philanthropy.”

“Charities have a role to play in fighting hate online by blocking donations to hate groups. Charitable gift funds – including the largest charity in the United States – are helping dozens of hate groups raise millions of dollars by allowing their donors not to reveal their identities,” said SPLC’s Chief Transformation Officer Lecia Brooks.

The white paper, a product of a symposium convened in August 2019 by CAIR, SPLC and the American Muslim Fund, was outlined in a joint CAIR/SPLC commentary published today in the Chronicle of Philanthropy.

SEE: How We Can Stop Hate Groups From Abusing Philanthropy to Raise Money (Opinion) – The Chronicle of Philanthropy

Last year, CAIR released a groundbreaking report, called “Hijacked by Hate: American Philanthropy and the Islamophobia Network,” listing the philanthropic foundations, many of them mainstream, that were used by anonymous special interest donors to funnel almost $125 million to anti-Muslim hate groups between 2014 and 2016.

The Southern Poverty Law Center, based in Alabama with offices in Florida, Georgia, Louisiana, Mississippi, and Washington, D.C., is a nonprofit civil rights organization dedicated to fighting hate and bigotry, and to seeking justice for the most vulnerable members of society. For more information, visit www.splcenter.org.