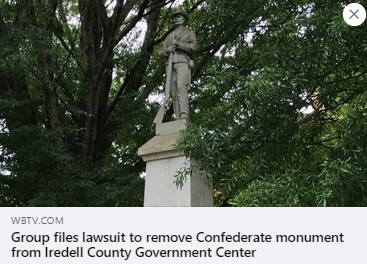 (WASHINGTON, D.C., 5/6/2021) – The Council on American-Islamic Relations (CAIR), the nation’s largest Muslim civil rights and advocacy organization, today welcomed a lawsuit by a coalition, including the NAACP, seeking the removal of a Confederate monument in front of Iredell County’s government center in Statesville, N.C.

That lawsuit by a coalition of local residents, NAACP chapters and a clergy group seeks an order directing the Iredell Board of County Commissioners to move the statue from the grounds of the government center.

Earlier this year, CAIR condemned the Ku Klux Klan (KKK) hate group’s targeting of those opposed to the monument. CAIR also welcomed a vote to remove that monument.

“We support and thank the NAACP and all the coalition members for their efforts to remove a symbol of slavery, systemic anti-Black racism and white supremacy,” said CAIR National Communications Director Ibrahim Hooper. “All Americans should do whatever they can to repudiate racism and to educate others about the negative impact of bigotry on our society.”