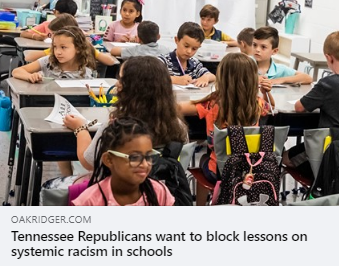 According to media reports, members of the Tennessee House education administration committee will return today to amend legislation with language designed to prohibit schools from teaching lessons about systemic racism. The move appears to be part of a nationwide effort by right-wing activists to ban the teaching of critical race theory (CRT) in schools.

“The nationwide effort to violate the First Amendment rights of teachers and school administrators, and to perpetuate systemic anti-Black racism and white supremacy, must be opposed by all Americans who seek a just and inclusive society,” said CAIR Government Affairs Director Robert McCaw.

Earlier this year, CAIR renewed its call for Tennessee to drop consideration of anti-Muslim activist and possible 9/11 truther Laurie Cardoza-Moore to that state’s Textbook and Instructional Materials Quality Commission.