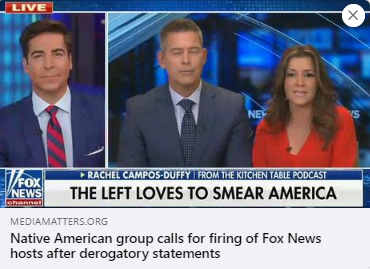 (WASHINGTON D.C., 10/18/2021) – The Council on American-Islamic Relations (CAIR), the nation’s largest Muslim civil rights and advocacy organization, today expresses support for the group IllumiNative – which seeks to boost the visibility of Native Americans in the media – and its calls for the firing of Fox News hosts who made derogatory comments targeting Native Americans.

Fox News contributor Sean Duffy said: “I had a lot of Native American tribes in my old district in Wisconsin. Good people, love them, but if we are going to look at the past, I mean, they burned villages, raped women, seized children, took their — took the people they defeated, took their lands, scalped people.”

Fox Nation host Rachel Campos-Duffy added: “The conditions from Native Americans have everything to do with government dependency, cycles of poverty and alcoholism, and family breakdowns. And these are things that the Democrats don’t want to talk about.”

Host Jesse Watters also said: “They are just going to try to send more slush funds to the reservations, and make them out to be victims, and then have them keep voting for Democrats.”

“We once again urge Fox News to take appropriate disciplinary action – up to and including firing – against all hosts who express racist views or who target minority communities with bigoted rhetoric,” said CAIR National Communications Director Ibrahim Hooper. “

Hooper noted that CAIR recently renewed its call for Fox News’ firing of host Tucker Carlson after he openly promoted the white supremacist “great replacement” conspiracy theory on his show.

He said the American Muslim community and CAIR stand in solidarity with all those challenging anti-Black racism, xenophobia, Islamophobia, anti-Semitism, white supremacy, and other forms of bigotry.