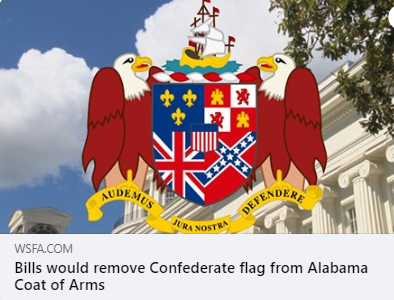 (WASHINGTON, D.C., 12/8/2020) – The Council on American-Islamic Relations (CAIR), the nation’s largest Muslim civil liberties and advocacy organization, today welcomed the removal of a confederate statue from the Virginia Military Institute (VMI), a call to remove the Confederate flag from the Alabama coat of arms and an effort to drop Confederate legal holidays in Florida.

In Virginia, the VMI board approved the decision to remove the statue of Confederate general “Stonewall” Jackson in late October. The removal comes after a wave of other confederate monuments across the country are being removed from public spaces.

In Alabama, State Rep. Laura Hall, D-Huntsville, has prepared three bills aimed at dismantling confederate language and representation in the state’s legislation and its entities.

Alabama’s state flag bears a coat of arms representing the confederate flag, a symbol Rep. Hall hopes to remove. The second bill put in motion would restrict the Sons of Confederate Veterans and the Daughters of the Confederacy from using the state’s armories. The third bill seeks to prohibit national guard members from donning confederate civil war medals. The bills will be introduced in Feb. 2021.

In Florida, State Rep. Mike Grieco, filed a bill (HB 6007) that would eliminate several Confederate holidays in that state. Florida is one a few remaining states that maintain Confederate legal holidays. Legal holidays are significant because they are usually observed by the whole state as paid days off.

Previous efforts to discontinue observing Confederate holidays have been sustained in 2018, but ultimately did not pass the Florida Legislature.

In Colorado, Neo-Nazi propaganda was found distributed in a Westminster, Colo., neighborhood over the weekend. Sidewalks, signs and a brick wall were also painted with hate graffiti, as well as Nazi swastikas and “KKK.”

“We support those individuals and institutions seeking to remove the racist legacy of the Confederacy. Anti-Black racism, white supremacy and all other forms of bigotry must be repudiated, not honored.”

He said the American Muslim community and CAIR are standing in solidarity with all those challenging anti-Black racism, xenophobia, Islamophobia, anti-Semitism, white supremacy, and all other forms of bigotry.