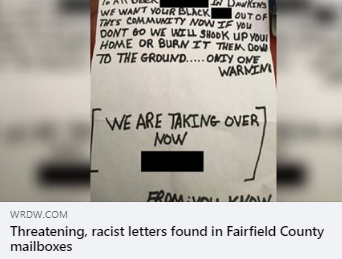 (WASHINGTON, D.C., 2/14/2021) – The Council on American-Islamic Relations (CAIR) today expressed support for student athletes at a Virginia college denied the right to kneel in protest of systemic racism before games, condemned racist mail distributed in South Carolina and welcomed a guilty plea for a racist hate crime in Indiana.

CAIR, the nation’s largest Muslim civil rights and advocacy organization, said it supports students at Bluefield College in western Virginia seeking to protest racial injustice who are not allowed to kneel during the pre-game national anthem.

Officials forfeited a game on Thursday chose to forfeit a basketball game instead of allowing players to kneel during the national anthem. Several players were suspended earlier this for taking a knee during the anthem before games.

In South Carolina,residents who are Black received hate mail that included racist language and threats such as: “We want your Black — out of this community now.”

In Indiana, an Indianapolis man has pleaded guilty to federal hate crime and weapons charges for threatening a Black neighbor. Shepherd Hoehn, 51, burned a cross above the fence line facing the neighbor’s property, displayed a Nazi swastika on his fence and played the Confederate anthem “Dixie” repeatedly.

“Every American has the right – and duty – to speak out against systemic anti-Black racism and to hold accountable those who perpetuate white supremacy and act on racist views,” said CAIR National Communications Director Ibrahim Hooper.

He noted that CAIR recently welcomed the decision to drop place names in Louisiana and Virginia honoring Confederates, as well as a new bill in New Hampshire to train park officers in anti-discrimination methods.

CAIR also condemned theft and vandalization targeting of a string of Asian restaurants in Howard County, Md., at the start of the Lunar New Year.

Hooper said Washington-based CAIR and the American Muslim community are standing in solidarity with all those challenging anti-Black racism, xenophobia, Islamophobia, anti-Semitism, and white supremacy.