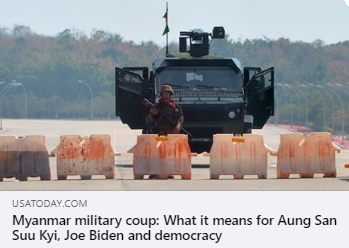 (WASHINGTON, D.C., 2/1/21) – The Council on American-Islamic Relations (CAIR), the nation’s largest Muslim civil rights and advocacy organization, today called on President Joe Biden and Acting Secretary of State Daniel Smith to “prioritize the safety and security of Rohingya Muslims and other ethnic and religious minorities in Burma,” also known as Myanmar, following the widely condemned military coup in that country.

President Biden has already threatened to “take action against those responsible” if the Burma military does not reverse the coup that has led to the arrest of that country’s civilian leadership.

“American Muslims are calling on President Biden to prioritize the safety and security of Rohingya Muslims and other ethnic and religious minorities in Burma following the military coup in that country.

“Burma’s military and elected government are both directly responsible for the genocidal campaign and systemic state discrimination that targets Rohingya Muslims and other minorities.

“While the U.S. government works to ensure that democratic rule of law takes root in Burma – CAIR is urging Acting Secretary Smith to safeguard the well-being of Rohingya Muslims under the threatening prospect of governance under Burma’s genocidal military leadership.“

Awad noted that: “The Biden-Harris administration should reimpose JADE Act sanctions on Burma – which bars gemstones from entering the United States via third party countries from Burma – and blacklist imports from companies with financial ties to Burma’s military.

The Burma military is responsible for an ongoing genocidal campaign that ramped up in 2017 against the Rohingya Muslim minority that included executions, mass killings and burials, destruction of villages, and rape on the orders of commanding officers.

CAIR notes that democratically elected leader of Burma State Counsellor Aung San Suu Kyi did nothing to stop Burma’s military and mob violence against the Rohingya Muslimsand has repeatedly denied allegations of genocide.

Last week marked the one-year anniversaryof the U.N. International Court of Justice at The Hague ordering Burma to “take all measures within its power” to protect Rohingya Muslims from genocide.

In September, CAIR called on the United States and the international communityto take concrete steps against Burma following video confessions from two soldiers of that nation’s military who say they took part in a genocidal campaign against the Rohingya Muslim minority. The two men were transported to The Hague, where the International Criminal Court (ICC) is investigating whether military leaders committed large-scale crimes against Rohingya Muslims.