CAIR Urges Utah Officials to Drop Hate Crime Enhancement for College Student Who Stomped on ‘Back the Blue’ Sign, ‘Smirked’ at Officer 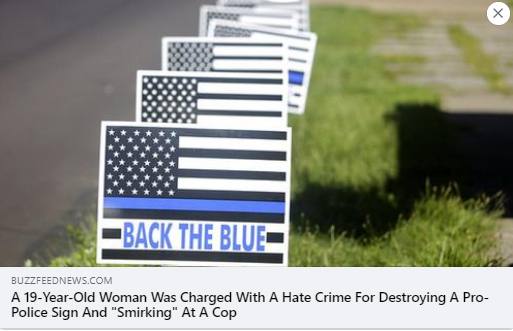 (WASHINGTON D.C., 7/15/2021) – The Council on American-Islamic Relations (CAIR), the nation’s largest Muslim civil rights and advocacy organization, is urging Utah officials to drop a hate crime enhancement for a teenage college student who allegedly stomped on a “Back the Blue” sign and “smirked” at a sheriff’s deputy in that state.

Along with the call to drop hate crime charges, the Washington, D.C., based civil rights organization also condemned racist “white lives matter” and neo-Nazi vandalism of a parking lot at a Utah high school.

In the hate crime case, a Garfield County Sheriff’s deputy reports that he was ending a traffic stop when friends approached to console those who had been pulled over in Panguitch, Utah.

According to the deputy, one of those people, 19-year-old Lauren Gibson, allegedly began stomping on the “Back the Blue” sign, crumbled it “in a destructive manner,” “all while smirking in an intimidating manner.” Gibson was charged with criminal mischief and disorderly conduct.

SEE: Garfield Co. sheriff defends decision to arrest woman for hate crime over stomping on ‘Back the Blue’ sign

“Utilizing such a low bar for hate crime charges does a disservice to members of minority communities who are actually targeted by hate and sends an intimidating message to all those who may have future interactions with law enforcement officers,” said CAIR National Communications Director Ibrahim Hooper. “Merely ‘smirking’ or stepping on a sign does not meet the state-mandated criteria of an act designed to ‘intimidate or terrorize’ others.”

He noted that yesterday, CAIR commended an invitation by the U.S. State Department to U.N. experts who investigate racism and minority issues to conduct an official visit to the United States.

CAIR: The UN ‘Racism’ Investigators Invited to U.S. by Blinken Have Never Been to China