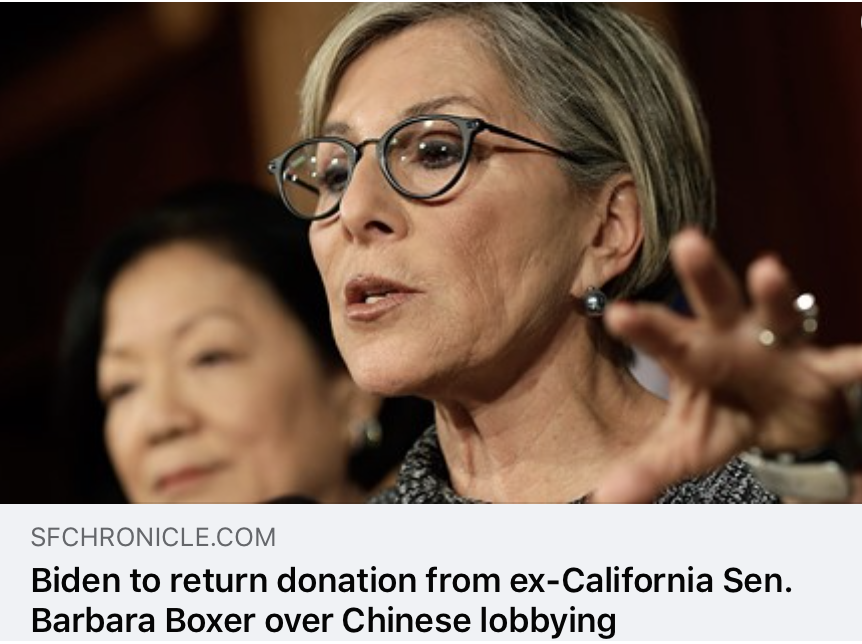 (WASHINGTON, DC – 1/15/2021) — The Council on American-Islamic Relations (CAIR) and its California chapter (CAIR-CA) today praised President-elect Joe Biden’s inaugural committee for refunding a $500 donation from former California U.S. Senator Barbra Boxer, who recently registered as a foreign agent due to her lobbying work on behalf of a Chinese firm that has allegedly helped China imprison hundreds of thousands of Uyghur Muslims in concentration camps.

CAIR, the nation’s largest Muslim civil rights and advocacy organization, also condemned Boxer for her decision to work for a blacklisted Chinese military proxy connected to China’s ongoing oppression and Genocide of Uyghur Muslims and other Turkic ethnic minorities in China.

On Tuesday, the controversy led to Boxer to announce her decision to de-register as a foreign agent for the U.S. subsidiary of Hikvision, a firm blacklisted by the U.S. Commerce Department after the Department of Defense reported the company is controlled by the Chinese military.

“We are pleased that President-elect Biden’s inaugural committee chose to reject former Sen. Boxer’s contribution. Hopefully, this gesture is a sign that the Biden administration will forcefully stand up against China’s oppression and systematic genocide of Uighur Muslims. It is quite disappointing that Senator Boxer, once elected to governmental leadership to serve the people of California, would have chosen to lobby on behalf of a foreign government dedicated to eradicating a large segment of its population.”

“CAIR thanks and commends President-elect Joe Biden’s inaugural committee for refunding former Senator Barbra Boxer’s contribution because of her lobbying on behalf of a Chinese firm linked to the unprecedented oppression of Uyghur Muslims. No American should turn a blind eye to China’s genocide of Uyghur Muslims, much less lobby in support of it.”

On Monday, CAIR welcomed Twitter’s decision to remove a “horrific” statement celebrating the ongoing genocide of Uyghur Muslims posted by the Chinese Embassy to the United States.

Last Thursday, China’s U.S. Embassy posted a state media report defending China’s oppression of Uyghur Muslims and other Turkic ethnic minorities in China by claiming that Muslim women in Xinjiang are “no longer baby-making machines” and that the decreased population growth in the province led to a drop in terrorism.

CAIR and other organizations condemned the tweet as an admission and celebration of genocide, and called on Twitter to remove the post, which the social media platform did on Saturday.