CAIR Welcomes Move by Virginia to Replace US Capitol Confederate Statue with Person of Color, Renaming of Confederate-Themed Highways 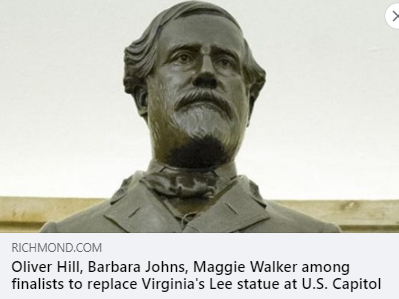 (WASHINGTON, D.C., 12/15/2020) – The Council on American-Islamic Relations (CAIR), the nation’s largest Muslim civil liberties and advocacy organization, today welcomed a move by the state of Virginia to replace a statue of Confederate general Robert E. Lee at the U.S. Capitol in Washington, D.C.

Five finalists being considered to replace Lee, including two people tied to the 1954 U.S. Supreme Court case that ruled against government-segregated public schools, are all people of color.

SEE: Lee statue at US Capitol to be replaced by 1 of 5 finalists

“A statue honoring a traitor who led armed forces against our nation in support of slavery and white supremacy should never have been placed in the U.S. Capitol. We welcome Virginia’s move to rectify this mistake and to instead honor those engaged in the struggle for civil rights.”

He said CAIR also welcomes the move to change the name of two Confederate-themed highways in Virginia. Lee Highway, which honors Robert E. Lee will be changed to Mildred and Richard Loving Avenue. They were the couple in the case that legalized interracial marriage.

A stretch of highway in Richmond named for the confederacy’s only president will also be renamed Richmond Highway.

Jeff Davis Highway to be renamed in Richmond

Hooper added that CAIR has repeatedly urged the removal of Confederate holidays, symbols and racist laws nationwide. He said Washington-based CAIR and the American Muslim community are standing in solidarity with all those challenging anti-Black racism, Islamophobia, anti-Semitism, and white supremacy.