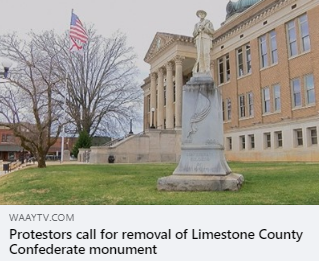 (WASHINGTON, D.C., 2/2/2021) – The Council on American-Islamic Relations (CAIR), the nation’s largest Muslim civil rights and advocacy organization, today welcomed a decision by the state of North Carolina to ban the Confederate flag from new license plates and offered support for the removal of a Confederate statue from outside a courthouse in Alabama.

The North Carolina Division of Motor Vehicles will no longer issue specialty license plates with the Confederate battle flag. That specialty plate was previously issued to members of the Sons of Confederate Veterans organization.

In Alabama’s Limestone County, calls are growing for removal of a Confederate monument in front of the county courthouse. Those opposed to the statue took part in a county commission meeting on Monday.

SEE: Local group calls for removal of a Confederate monument in Limestone County

“We must not honor traitors who sought to perpetuate white supremacy and to destroy our nation,” said CAIR National Communications Director Ibrahim Hooper. “All symbols of support for the racist Confederacy should be removed and relegated to the dustbin of history.”

Yesterday, CAIR condemned a racist bank charge after a Black woman traveled with American Airlines from Charlotte Douglas Airport and supported a fine against a former Idaho resident for racist robocalls.